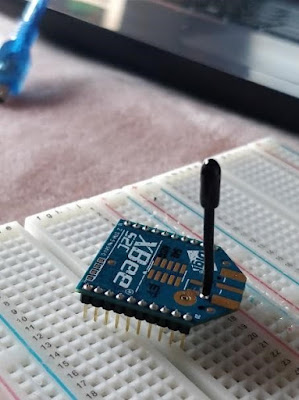 We have decided to use XBee Wireless Shields, as they are cheap and seem to have adequate documentation for use with Arduinos. Thus, we set about finding how we would implement them.
We found this webpage, which gave us an introduction to using the XBees, and it didn't take long for the radio to start transmitting. The code for the outlets is as follows:

And for the hub: 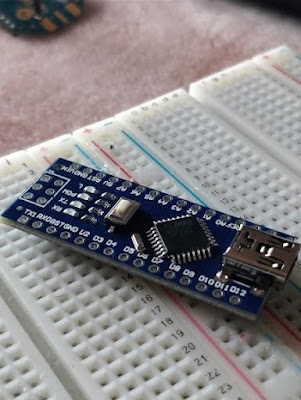 We then focussed our attention on the Raspberry Pi, and, after doing some research, found out we could use a simple jumper cable from one GPIO pin to another in order to receive radio signals. This was also easy to implement - although we didn't have the perfect length of cable, so signal was a bit patchy to start with.

After finding the correct length wire & getting the Arduino to send data to the Pi, we encountered the problem of range. We realised that in a home, data may have to be transmitted over 50m, and through multiple walls - meaning that the current setup wouldn't be adequate. Therefore, we began looking for an alternative, as long-distance radio transmission was seemingly too complicated from such budget devices. We originally thought of Bluetooth, but, again, range was a problem (Bluetooth only allows ~10m). Eventually, we settled on WiFi - it is a widely available, easy to access resource that 90% of households in the UK have (source: ONS). Range will already be adequate, as it is likely that the signal covers the whole house already, and sending data via WiFi Direct is simple. 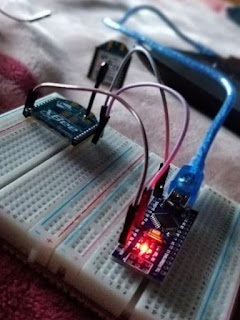 However, this brought the problem of WiFi support on the Arduinos. Without extra adapters, they didn't include it, and buying WiFi adapters for every outlet in the home didn't seem cost-effective. We then realised that the Raspberry Pi Foundation released the Raspberry Pi Zero W in February of last year - another budget device that includes WiFi, and has GPIO pins. Because of the overwhelming benefits over Arduino Nanos, we opted to use these instead.

We then implemented them with the flow meter, allowing us to continue with other aspects of the project.


To preview how the site would look in your home, please see our demo site; all of our code is available open-source on GitHub.

Popular posts from this blog

- March 27, 2019
AI tips have finally made their way onto our test site, after having spent some time coding the hub to process the received data each second (using Python) and read from the files produced by this process when the tips dialog box is opened. The adjusted Python code for the hub is as follows: import os, pause from datetime import datetime def updateTips(): messages = ["outlet,message\n"] bad_usage = [] amazing_usage = [] rising_usage = [] lowering_usage = [] for file in os.listdir(os.fsencode("rates/daily")): outlet = os.fsdecode(file).replace(".csv", "") now = datetime.datetime.now() with open("totals/daily.csv", 'r') as file: data = file.readlines() line_number = [index for index, item in enumerate(data) if (outlet + ",") in item] daily_value = float(data[line_number[0]]) with open("totals/weekly.csv", 'r'
Read more 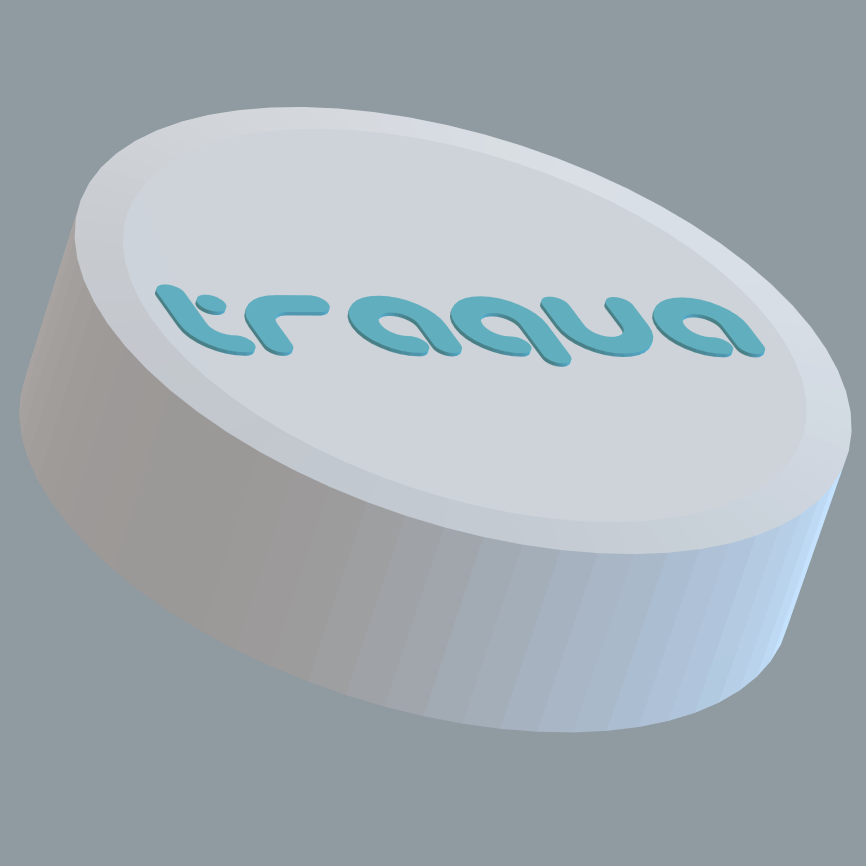 We recently mocked-up the housings for both the hub & outlets - feast your eyes! Hub: Outlets: These housings will be fully waterproof. To preview how the site would look in your home, please see our demo site ; all of our code is available open-source on GitHub .
Read more 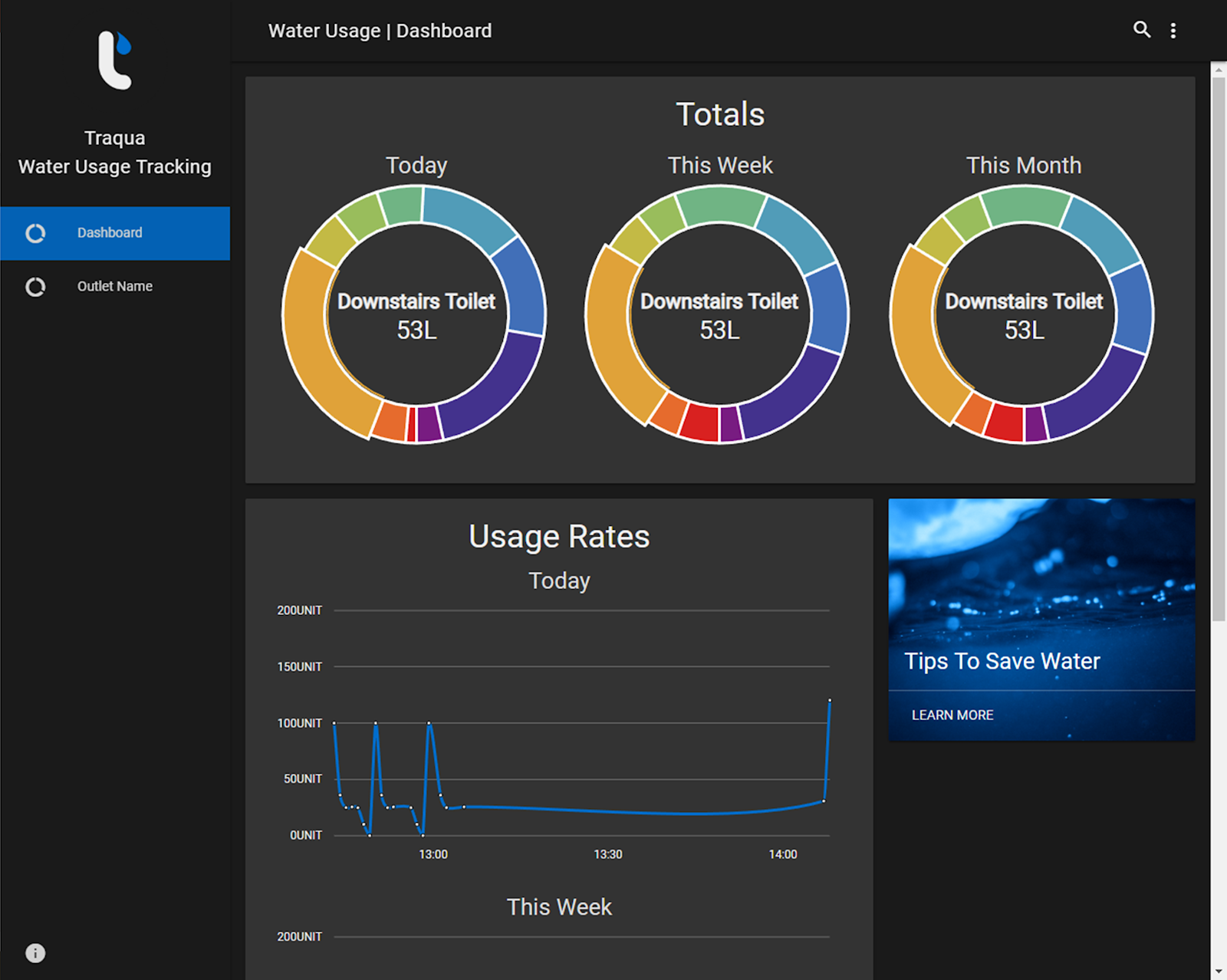 I've finished coding the website! I used the Material Design Lite Dashboard  template ( https://getmdl.io ), and made significant theme and content changes (including creating a dark theme, based on the two main colours in our logo - #1A1A1A & 006DCC). The dashboard now looks like this: It depends on the following resources: Material Design (material.min.js, material-theme.min.css) Material Icons (material-icons.css) jQuery (jquery.min.js) Morris JS (morris.min.js, morris.css) Raphaël (raphael.min.js) Palette JS (palette.js) jQuery CSV is used to retrieve the data from CSV files on the local server, and Morris JS (which depends on Raphaël) is for the charts that are created from the CSV data, and Palette JS is used to create an array of colours forming a rainbow for each doughnut chart. The charts are configured to update every second; the code is all available open-source  on GitHub . We are yet to implement the AI tips service, and are in the process of org
Read more